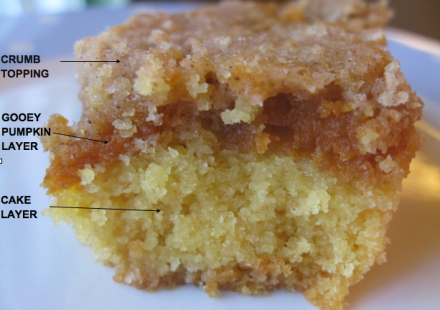 Confession: Every time I go to the mall I stop by Williams-Sonoma with rarely any intention of buying anything.  I am there for the sample of the day.  This particular sample is my favorite.  A layer of pumpkin between a cake bottom and a crumb top makes for a particularly gooey and delicious bite.

I had completely forgotten about this recipe until I stopped by the store the other day and they had some fresh out of the oven.  When I came home the other night in the mood to bake, I knew this is what I wanted.

While W-S would love for you to use their Pecan Pumpkin Butter… I’m here to tell you that it does not matter.  I used Trader Joe’s pumpkin butter and it works just as well.  For the crumb topping, use your favorite fall spices.  I added a little all-spice (which is a combination of cinnamon, nutmeg, and cloves) to the teaspoon of cinnamon the recipe calls for.  Also, I had a “Butter Recipe Golden” cake mix on hand, rather than a yellow cake mix, and it worked equally as well.

This recipe is super simple, and the only annoying part is that you will have to wash three bowls, one for each layer.

In separate bowls, mix together ingredients for each layer.  In a greased 9×13 pan, layer with cake, then pumpkin, then crumb topping.  Bake in 350 degree oven for 35-40 minutes.