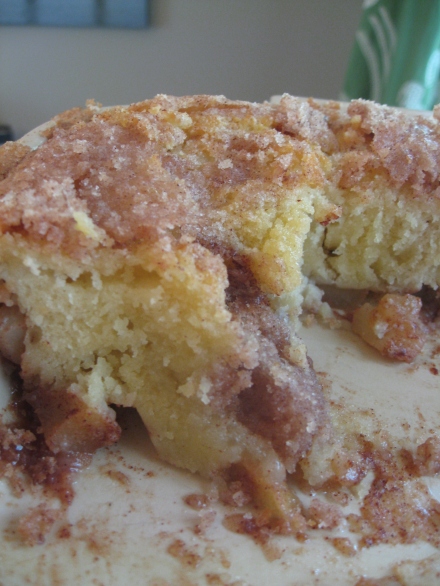 Usually you learn another language before you go and visit a foreign speaking  country.  Well… I’m doing the opposite.  After returning from my trip, I downloaded a few “Learn German by Podcasts” to listen to on my way to and from school each day.  It is quite entertaining!  My favorite podcast is, shockingly, the visit to the bakery.

A man walks into the bakery and asks for a piece of cake and then asks what kind of cake it is.  “Is that apple cake?  No, it is not apple cake.  It is cherry cake.”

Apple cake??  What in the world is apple cake?  I had to find out.  I did a little research, and found a few examples including this one on smittenkitchen.  Apple cake looked…ok, but I wanted my apple cake to be different.  I wanted it to be along the lines of coffee cake.  Solution: make an apple coffee cake!

I used my favorite coffee cake recipe from the Waldemar cookbook and added a layer of apples at the bottom.  I had some leftover buttermilk, so I replaced the regular milk with that.  Instead of using all of the butter in the cake (it is pretty rich), I substituted ¾ of the butter with unsweetened apple sauce.  It came out delicious!

I just want to make it clear, that if you walk into a bakery in Germany and ask for a piece of apple cake (“Ich möchte ein Stück Apfelkuchen”) that what you get will likely not be anything like this cake.  **Sidenote: I went back to Germany this past May and could not find any apple cake!  I finally settled on ordering Apple Strudel (in German I might add) which only led to more confusion because for the rest of the meal the waitress thought I spoke German. **

As for my German, I can ask for apple cake, but I still can’t count to ten.  I’m not sure how this is going to help me the next time I’m in a panic at a train station in Austria at 6:45 in the morning because I don’t know any German and I got off at the wrong train stop.  (Don’t worry, I still made it to the airport in time for my flight despite running to another train station with 3 bags and missing my train by one minute – silly Germans and their punctuality!)

Preheat oven to 375.
Toss the apples with sugar and cinnamon. Set aside
In a mixing bowl, cream applesauce, softened butter, and sugar until light and fluffy.  Add eggs and continue to beat.
Sift together in a separate bowl: flour, baking powder, and salt.
Stir in flour mixture and milk, alternating.
Add vanilla and stir to combine.

Put the apples at the bottom of a 9×9 pan.
Add cake batter on top.
Bake in oven for 20 minutes.

Meanwhile, mix together sugar and cinnamon for the topping.  Cut in the butter.

Take the cake out of oven and sprinkle the topping over the cake.
Bake for an additional 20 minutes (or until a toothpick comes out clean). 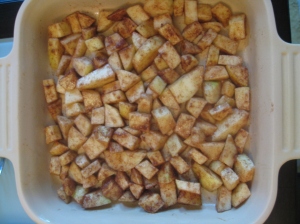 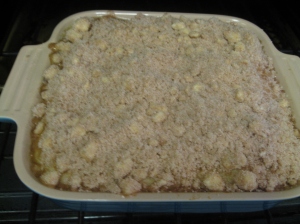 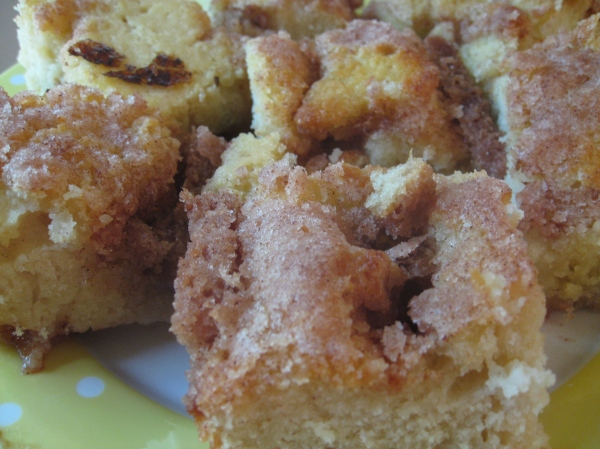